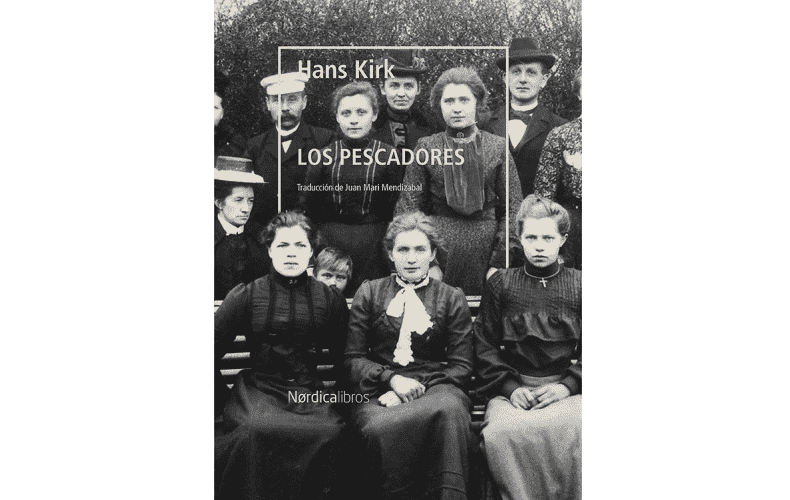 For the first time in bookshops all over Spain, readers can find a classic of Nordic literature: Los Pescadores. One of the most widely sold and read books in Denmark, Hans Kirk's work describes with great skill the religious fundamentalism and the capacity of human beings to adapt to the confines of the world.

At the end of the boat, there is a small group of people looking out over the fjord in the distance. They are dressed in elegant blue-marine dresses, shiny boats and fossilised boots. They only dress like this at weddings and funerals. But that day is even more important. They are the fishermen from the west coast, who are waiting for the arrival of the boat on which their wives and children are coming. They had arrived months before, opening way for their families. They are tough people in a tough place: the frozen north of Denmark, the Limfjord. And yet they will have to become tougher to survive in a strange land. With them, they carry the baggage of a culture and a religion to which they will find it hard to adapt.

So begins Hans Kirk's The Fishermen, one of the most important Danish novels of the 20th century, which is required reading in every school in Denmark. It has been the most widely read and sold book in the Nordic country for decades and is now available in SpainÂ´s bookshops for the first time. Written in 1928, the book tells the true story of the conflict between the inhabitants of the town of GjÃ¸l and a group of fishermen who moved there from the North Sea coast. The newcomers are Christians to the core, the kind who do not contemplate variations from the more orthodox faith. They soon clash with the more open-minded residents.

The novel caused consternation in this city and throughout the country. This was because the author had a deep knowledge of the people and the area. His father was from a poor fishing family. Growing up, Kirk acquired a deep knowledge of the faith of his ancestors. In addition, he travelled to GjÃ¸l several times and even spent the summer of 1925 helping his uncle, who was a fisherman in the area.

But Hans Kirk was able to escape that harsh fate. A lawyer and journalist, he became one of the most famous authors in the country's literature. From 1926 to 1928 he was a regular contributor to Kritisk Revy, an architectural magazine.

In 1941, during the German occupation, Kirk and hundreds of others were arrested without charge by the Danish police in a raid against communists and left-wing sympathisers. He was imprisoned and detained in the Danish concentration camp of HorserÃ¸d, from which he managed to escape in 1943.

This work, Hans Kirk's first, is an essential text that delves into religious fundamentalism and migration, masterfully describing life in the fjords. His novel emphasizes the idea of a god as provider, even in places far from God's hand, against hunger, the enemy's hatred, and death. The roar of the sea, the fog that creeps into the sandy fields, the storm, death, and poverty, old acquaintances of the fishermen, complete the atmosphere.