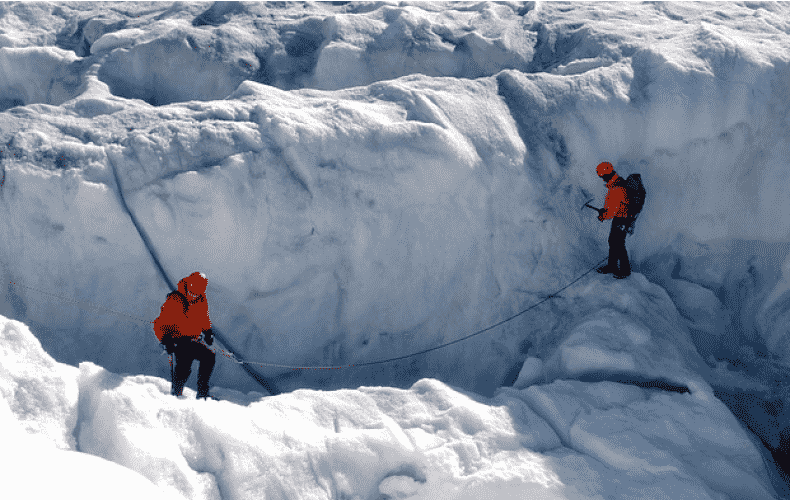 Felix Keller is visibly excited. He doesn't seem to mind the double-digit temperatures at 2100 meters above sea level at the Diavolezza valley station in the Upper Engadine. Anything else would be strange, of course. After all, ice is Keller's element: he is a glaciologist. And the 58-year-old Swiss has been working towards this moment for a long time - the opening of a test facility for snow-making on glaciers. In the livestream documenting the event, the sound drops out every now and then because of the freezing temperatures. But Keller gets his message across anyway: The patented technology is intended to slow down the melting of glaciers.

Global warming is taking its toll on glaciers around the world. The accelerating ice loss is contributing to rising sea levels and endangering the freshwater supply for millions of people. Isolated attempts to cover glacier surfaces with a polyester fleece have been successful, but such a cloth can only be spread over small areas. For a large glacier like Morteratsch, which lies near the Diavolezza valley station, a completely different solution is needed.

Together with Dutch glaciologist Johannes Oerlemans, who set up a weather station on Morteratsch in 1995 in the service of Utrecht University and is very familiar with the terrain, Keller developed the idea of artificially snowing glaciers. "Snow reflects incoming solar radiation and insulates against warm summer temperatures," Keller says. "Underneath, not a milligram of ice melts."

A gigantic undertaking
But how do you get the snow onto the glacier? Normal snow cannons, such as those found in ski resorts, cannot be installed because the ice masses are constantly moving. Therefore, where it is topographically possible, the researchers want to stretch wire ropes up to one kilometer long across the glaciers, from which lines with up to 150 nozzles are suspended to spray snow. At least six cable systems of this kind would be needed to keep a square kilometer of glacier covered with snow all year round.

This would require 30,000 tons of artificial snow to trickle down every day. However, there are always days in summer when it is too warm for snow production. Therefore, a buffer is needed. The ideal snow height to accumulate as a precaution during colder operating periods, Johannes Oerlemans estimates, is around 20 meters.

Where will the water for these massive amounts come from? The glaciologists have an answer to this question as well: they want to use the meltwater that the glacier releases in summer. To do this, they plan to draw on existing glacial lakes, whose capacity could be increased with simple dams if necessary. "This is an intervention in nature; we can't sugarcoat it," Keller admits. But in his view, it would be justified in order to protect the glaciers.

The test phase is underway
However, it is still a long way from being ready. Keller has only installed a small rope system with five spray nozzles in front of the Diavolezza valley station for test purposes. It is now necessary to see how well these work, whether the snow produced is usable and how the mechanics behave at low temperatures. "The water must not freeze in the pipes." To do that, he said, the water must always be in motion until it is expelled. In the event of a malfunction, the system is programmed to empty the pipes at lightning speed, he said.

If the tests are successful, the researchers hope to be able to install a much larger pilot system with a 600-meter-long cable above a ski slope on Piz Corvatsch next winter. Then it would also be possible to see whether the snowmaking technology is also suitable for winter sports purposes. However, there is still no funding for the project, which will cost almost three million Swiss francs.

Keller calculates that it would cost around 100 million Swiss francs over a period of 30 years to make enough snow on a glacier to significantly reduce overall ice melt. The sum is made up of construction costs of 40 million francs and annual operating costs of two million francs. "Switzerland can handle that," Keller states unapologetically. At the same time, he is aware that the hurdles to implementing his glacier protection concept are very high. This does not diminish his own commitment: "I would like to tell my grandchildren: at least we tried.